Spark Streaming has many commons compared with Spark, it abstracts DStream which based on RDD, its transformations and outputs are similar to Spark. But due to its periodically running property, some problems which may not be serious in Spark will become a big deal in Spark Streaming. This article introduce a dependency chain problem which will delay streaming job gradually and make the job crash. 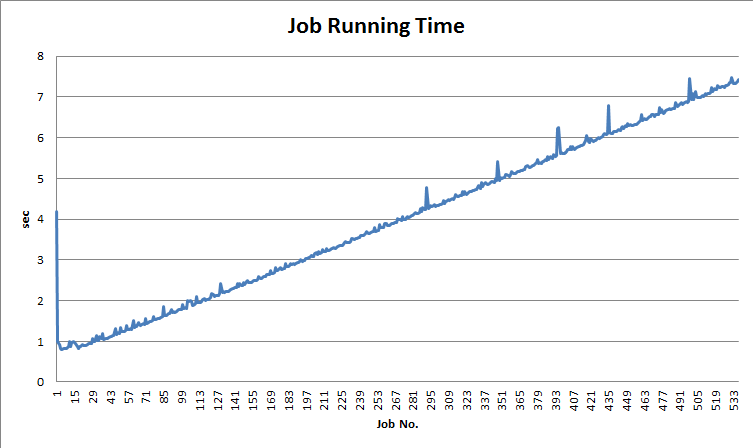 In my zipPartition, I will filter out some records which are older than a specific time, to make sure that the total record numbers in the RDD will be stable.

So in a common sense, while the input data size is almost the same, the job’s running time of each batch duration should be stable as expected. But as above chart shows, running time gradually increase as time passes by.

So as included, the growth of dependencies makes serialization and deserialization of each task be a main burden when job runs. Also this reason can explain why task deserialization will meet stack overflow exception even job is not so complicated.

I also tested without oldRdd combined, each time newGenRdd will be put in Shark’s memoryMetadataManager but without zip with oldRdd, now the job running time becomes stable.

So I think for all the iterative job which will use previously calculated RDD will meet this problem. This problem will sometimes be hidden as GC problem or shuffle problem. For small iteratives this is not a big deal, but if you want to do some machine learning works that will iterate jobs for many times, this should be a problem.

This issue is also stated in Spark User Group:

Is there some way to break down the RDD dependency chain?

One way to break down this RDD dependency chain is to write RDD to file and read it back to memory, this will clean all the dependencies of this RDD. Maybe a way to clean dependencies might also be a solution, but it is hard to implment.